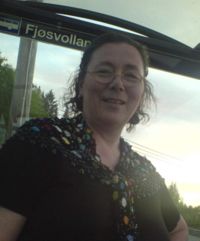 Mån lav Risstin - I am Christine.

My name is Kristin Lindbach. I live in Siljárbahkko/Skilvassbakk in Hábmer/Hamarøy municipality in a Lule Sami area. The coastal inland area was not registered in the land register before the end of the 18th century - which means that until then it was "no man's land" or rather Sami land - Sábme. Here, my husband Harald and I have a small farm with some sheep, the mare Rosita - which is of use in farm work and forestry, a number of rabbits, and the cat Miri. Throughout the years even more sheep, several goats, a cow and calf, and a number of different races of hens, ducks and geese have also been passing through the fences of our farm, which we run ecologically in the traditional way. Four of our children have been raised here.

I am a master student of linguistics at NTNU. In my studies I look into different aspects of the Lule Sami grammar. I participated at the Saami Linguistics Symposium 2006 in Tromsø. My special interest is the so-called "postpositions", in particular the spatial and temporal ones - or Nspat/Ntemp, as defined in TypeCraft.

I have learned both North Sami and Lule Sami, but I am not a regular speaker of Sami, hence my language ability is suffering. But there are other fluent speakers of Sami at home.

Harald, my husband, has taught North Sami and is the author of several books on first-language level for 2nd to 4th grade, a beginner's book for high-school students and a mini grammar for the use in school - as well as poems and a picture book for children in both North Sami and Lule Sami.

Arnhild, my first daughter, changed from North Sami language-and-culture level to Lule Sami second-language level at Måsske/Musken school in 9th grade and then did her 10th grade in the Sami first-language class at Ájluokta/Drag School (both in Tysfjord municipality), followed by high school/upper secondary school and university studies, now a master student of linguistics at NTNU (!). She is mother of Kristine - or Risstin in Lule Sami, with whom she speaks solely in Lule Sami.

Hans Ole, my fourth son, did two years in the Sami kindergarten, first in Musken and then at Árran Lule Sami Center at Ájluokta/Drag, before he began school in the Sami first-language class, where he is now doing his 8th year at school.

Kristmar, my second daughter, did a year of North Sami at language-and-culture level before she changed to second-language level in Måsske/Musken, continuing at Ájluokta/Drag, from where she now has graduated.

The last two summer seasons I have worked as guide at the museum at Arran Lule Sami Centre.