Difference between revisions of "Parallel Annotation of Speech and Text"

This page is under construction

Goal of this short pilot has been parallel sound and text annotation. The study has been conducted by Professor Wim van Dommelen and Assc.Professor Dorothee Beermann at the Institute of Languages and Communication Studies at the Norwegian University of Science and Technology.Scientific assistant for the project was Asger Hagerup. The project has been funded by the SSTL.

Praat is a signal analysis software developed by Paul Boersma and David Weenink from the University of Amsterdam. It is a tool widely used for the annotation of sound objects. For the present study we have taken advantage of the fact that Praat annotation data resides in a TextGrid object that exists separately from the sound object. Using annotated tiers allows easy referencing of data across applications. At present our sound signal representations are static, and selective, that is, they focus on the presentation of one selected feature to illustrate interesting correlations across phonetic and linguistic categories. Further funding will allow us to develop an interactive representation of speech data in the near future.

Below are some annotated sentences uttered by speakers of three different dialects of Norwegian, which could be used as data for many different linguists. A syntactician working on e.g. how clitics are used cross-linguistically would find some of this sentences by searching for clitics in the TypeCraft database. A phonologist interested in e.g. vowel reduction would be able to download the sentences and TextGrid files to view them in Praat and get an idea of where and how vowel reduction happens in Norwegian. A phonetician may be interested in examining e.g. Voice Onset Time in Norwegian, and would also benefit from the data. And for a linguist working with dialectology this data with morphosyntactic annotation combined with phonetic/phonological annotation would allow a thorough comparison of the dialects, in any linguistic field.

To illustrate some of the differences between Norwegian dialects we could look at both segmental and suprasegmental phenomena that are used in dividing Norwegian language into a western and an eastern dialect group. On the segment level we can examine the pronunciation of the phoneme /r/. As can be determined by the attached sound data, the Bergen (western) speaker pronounces this as a voiced uvular fricative, while the Trondheim and X (eastern) speakers pronounces it as a voiced alveolar tap (although the segment may also appear as an approximant in rapid speech for all three speakers). In addition, the Trondheim and X speaker have an assimilation between /r/ and a following alveolar consonant: the consonant sequence surfaces as a retroflex version of the latter consonant. This is not the case for the Bergen speaker, where the two segments are preserved in the surface form.

To illustrate a suprasegmental phonomenon we can look at the pitch contour for bisyllabic words with initial stress. For these words there are two possible pitch contours in Norwegian, with either two or three tones. These two pitch contours are commonly called toneme 1 and toneme 2, respectively. In one of the sentences uttered by the Trondheim speaker we look closer at how toneme 1 and 2 are used in inflection, but here we shall briefly look at how toneme 1 is realised in the different dialects. 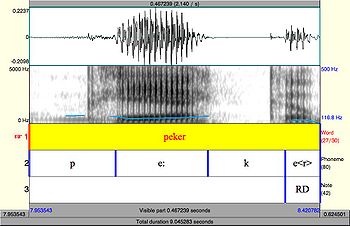 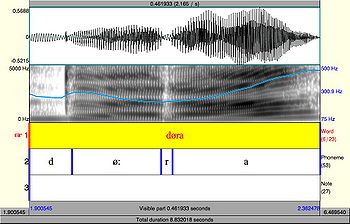 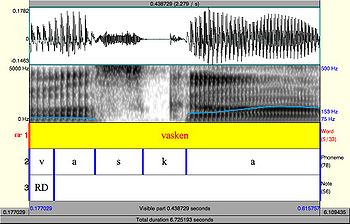 Above are screenshots of three words taken from the sentences and viewed in the Praat application. The blue curve in the middle of the pictures shows the fundamental frequency, or pitch, throughout the pronunciation of the word (it has gaps because unvoiced sounds do not have any pitch). Examining the pitch contour of the words we see that the Bergen speaker pronounces /pe:ker/ with an HL pitch contour, i.e. a high tone on the first syllable and a low tone on the last syllable, while the pattern is the opposite (LH) for the Trondheim (/dø:ra/) and X (/vaska/) speaker. Because of the high tone on the stressed syllable, western Norwegian dialects are often referred to as high-tone dialects and contrarily eastern Norwegian dialects as low-tone dialects. However, there are differences between dialects in the same group as well, comparing the Trondheim speaker and the X speaker we see that the former has a gradual rise from L to H, while the latter has a more abrupt rise at the end of the word.


File download for Praat (Downloading Help):
Hun står med ryggen mot veggen opp og ser på han som skal kaste ballen som står utenfor og peker på boksene.
“She's standing with her back up against the wall and looking at him, who is standing outside and about to throw the ball, and pointing towards the boxes.”

The TextGrid files are opened together with the matching sound files for viewing in the Praat application. The TextGrid files consist of three tiers, 'Word' (rendered in Bokmål orthography) 'Phoneme' (shows underlying segments) and 'Note' (shows surface realisation with IPA symbols, and other notes). In the phoneme tier, a hash (#) represents a word boundary and a segment inside angle brackets (<>) is an underlying segment that is syncopated or otherwise missing in the surface form.