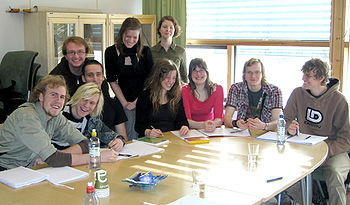 This and the dependent pages have been developed by second-semester students at the Linguistic Department at the [http://www.ntnu.no/ Norwegian University of Science and Technology] in Trondheim, Norway. All students could use these pages as an information hub, e.g., for term papers and for the final exam. Frawley's book [1] served as our reference book.

We will define notions of or related to space and deixis. These notions will be used to determine the semantic content of a set of Norwegian (and a few Danish) prepositions.

Spatial concepts are in essence relations between two or more entities. Whenever you make a statement about the location of an object, you state the location relative to another object. While you can claim that an object is inside another object, you cannot claim that it is inside, but not of another object. The conception of space incorporated in language is a naive one according to Frawley (1992), proven to be wrong by modern physics, yet beliefs such as 'there is empty space and there are solid objects with no space in them', 'there are absolute directions' and 'it is possible to not be in motion' seem to determine how space is encoded in language, and how it is in fact perceived by human beings.

The object whose location you make a statement about is called Figure, while the other object, which you compare the location of the located object with, is called Ground. The linguistic terms Figure and Ground (for more information see for example Talmy (1975)) reflect the use of these concepts in theories of human perception. For some more information see: Figure and Ground in human perception

Parts of the information conveyed by a sentence is signaled relative to a given location in time and space. This information is called deictic information.

Reference to PLACES can be given absolute, such as by the phrase in the house or relative, such as by the adverb here. The latter expression can only be understood contextually which makes deictic spacial expressions anaphora. For more information follow the internal link above. 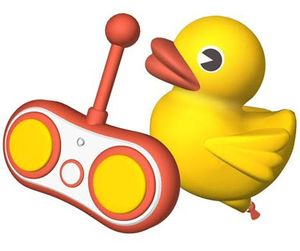 Norwegian encodes remoteness as distance from the speaker and it features a binary distinction, that is, something is either close to the speaker or far from it.

Closeness of the figure to the speaker is encoded by 'her', while remoteness is coded by 'der'

Languages may encode any number of degrees of remoteness.

Lexical semantics distinguishes between several topological notions. Some of them are mentioned in Frawley (1992), such as interiority, coincidence and exteriority. These three locations have in common, that they are not dependent on a viewpoint, that means they are constant no matter where the viewer stands and which reference point (s)he chooses to describe the location in question.

For example, if a cat is located interior to a house, this relation pertains independent of where the speaker and the hearer stand relative to the situation described. The reader might try the same with exterior and coincidence after reading our notions of those concepts below.

When we talk about conveyance in the context of motion, we mean how the motion is carried out. The main difference is vehicular vs. non-vehicular transport. If a Figure coincides with the Ground, the Figure and Ground share some space. This sharing can mean two things occur in the same space or that they are in some sense attached or related to each other. The space shared can also be an ideal space projected by the Ground. In this case there exist a conventional notions of how big such a projected space is, depending for example on the size of the Ground. The space projected by a fly might not stretch as far as the space projected by a house. 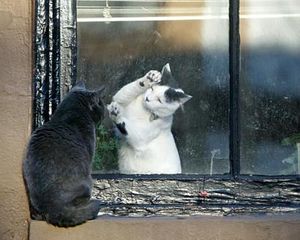 When a Figure is located interior to a ground, the figure can be said to be contained in the Ground. This can be partially as well as totally, and both options imply that the figure must be smaller than the ground. It should be noted, that if the gound is for example a garden and the figure is a person, an interior relation between does not (necessarily) mean that the person is burried in the garden. The person might perfectly well be standing up with the feet being the only body parts interacting physically with the garden. We still think of the person as interior to the garden though, since we think of this interiority as occupying some space inside the area referred to as a garden.

The preposition "under" signals inferiority and can also signal coincidence (for example in 'tyggisen er festa under bordet', where the chewing gum is stuck to the bottom side of the table). An example could be "en katt ligger under bordet", translated to "a cat lies under the table". The located object is "en katt" and the reference object is "bordet". The located object is placed in the downward space from the underside of the table, without the two being in any contact with each other.

The preposition "under" in Norwegian can also denote time, as in the sentence "under krigen", which means "during the war". Here we don't have any located object, only a reference object, namely "krigen".

"Nedenfor" is another preposition signaling inferiority, it signals that the located object is in the space below the reference object. The relation is not of coincidence, since there isn't any contact between them. An example could be "huset ligger nedenfor skolen", translated to "the house lies below the school". You can also use "nedenfor" to denote a paragraph later on in a book, "et avsnitt nedenfor på siden", which means "one paragraph further down on the page".

-The figure is located in the area below the ground, where below is defined in terms of the observer's point of view, or as defined by the ground itself.

Anteriority: In Norwegian as for the frame of reference, the front is determined by the frame of reference of the viewer, when we talk about anteriority. If we say in Norwegian "Clare stands in front of the museum" we mean that from the viewer's point of view Clare is standing in front of it, and then it is likewise whether the front of the museum itself is turned towards her or the back of it is.

We have "fremfor" describing anteriority in the physical sense having a physical location, also it describes prioritization, so it is a conceptual expression too. For instance we could have the sentence "Hun valgte sjokolade fremfor iskrem", which means "she chose chocolate rather than ice cream". So in this sentence we have a concept of what one prefers. When "fremfor" is used as a location physically it denotes anteriority. An example would be "en bil står fremfor huset", meaning "a car stands in front of the house". Here the located object is "bilen" and the reference object is "huset". So physically the car is in front of the house from the frame of reference of the viewer.

"Fremom" denotes anteriority in Norwegian. An example could be the sentence "Barna springer fremom foreldrene", meaning "the children run ahead of the parents". In the physical sense I would suggest these two variants to be expressing not only that the children in this example are running in front of the parents, but that there is a goal here. All are heading towards a place, which is the goal, and therefore the located object running in front of the reference object is also ahead, it is leading the path towards the goal. We have locomotion here, namely the running, a place, a goal and a path, and the action is not finished, so there is atelicity involved. An example of the conceptual use of these two is "Han valgte hus fremom leilighet", which means "He chose house rather than apartment". "Foran" is the perhaps most common preposition to express anteriority in Norwegian. An example could be "En gutt står foran huset", which means "a boy stands in front of the house". The located object is "en gutt" and the reference object is "huset". We have a physical location here, and the relation between the objects is the one of anteriority. "Mye trening før fotballkampen", which means "much practice before the football match", so as we can see "foran" can also denote time. Here "foran" is used in the conceptual sense and there is no physical location.

-The figure is located in front of the ground. In front of is defined in terms of the observer's point of view, or as defined by the ground itself; the concepts define on the following page apply

Figure is the entity that is displaced by the predicate.

The Source of motion is the location from which the moving object (Figure) starts it's motion.

Goal The goal is the location to which the moving object (Figure) moves.

Location The surroundings in which the motion events take place.

- Where the movement happens.

Path Motion can be both path consuming and non-path consuming. Many languages encode this difference, for example German.

Path consuming motion is when an object moves from location A to location B. When the object has arrived at location B the motion is complete. It does not move around unspecified inside an area.

Dancing is a good example of non-path consuming movement because it is motion, but the point of the movement is not to move from one location to another. This is not what is achieved either.

The trajectory of the figure

- By which means movement is made possible. The basic distinction is between vehicular and non-vehicular transportation.

- How motion events are performed in terms of speed and intensity.

- The relationship between a movement and what causes the movement.
Retrieved from "https://typecraft.org/w/index.php?title=Classroom:NTNU,_LING1113_(2009)_-_Motion_and_Space&oldid=15485"
Categories: