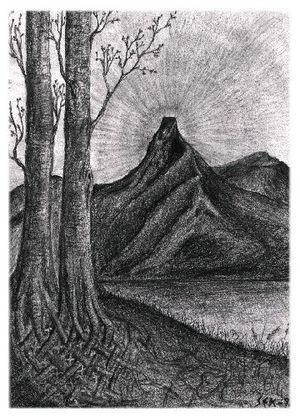 The Sami are an indigenous people living in Norway, Sweden, Finland and Russia. Their territory stretches today from the Kola peninsula in northwestern Russia to Engerdal in southern Norway and Idre in southern Sweden. This area is called Sábme in Lule Sami and Sápmi in the North Sami language. Traditionally, the Sami have lived from hunting, fishing, reindeer herding and farming, but today most of them have modern jobs. There are many interesting Internet sites about the Sami - the people, their language, culture and history. We suggest some links you may find useful at Lule_Sami_online 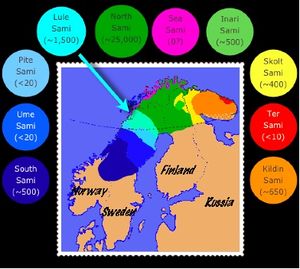 Here is a map of Scandinavia with the Sami areas in color. Modified by Bruce Morén-Duolljá

The Sami people has been living on the Scandinavian and Kola Peninsulas in northwest Europe since prehistoric times. Recent genetic (Niskanen 2002; Tambets, et al. 2004), archeological (Broadbent 2004; Zorich 2008) and linguistic research (Sammallahti 1998; Aikio 2006, 2007a, b) suggests that they are descendants of the first inhabitants of the area after the glaciers of the last Ice Age receded.

Archeological and historical evidence shows that the area traditionally inhabited by the Sami extends along most of the western coast of Norway, along most of the western coast of the Gulf of Bothnia in Sweden (Broadbent 2004; Zorich 2008) and well into Hedmark in Norway and southern Dalarna in Sweden (Hallerdal 1998a, b, c). The extent of Sábme along the coast of Sweden is shown on the following map, but it is not shown on most modern maps for political reasons (Broadbent 2004). Dalarna is currently missing from Sábme on this map, but it will be included in the future. The Sami have also lived farther east and south in Finland than is shown here.

Although the Sami languages have a quite complex history (Sammallahti 1998; Aikio 2006, 2007a, b), they are traditionally classified as belonging to the Uralic language family and are thus claimed to be unrelated to most of the other languages in Western Europe. Current theories suggest that their closest linguistic relatives are the Balto-Finnic languages - Finnish and Estonian (Sammallahit 1998, Aikio 2007a, b) and that the ancestors of the modern Sami and Balto-Finnic languages separated from one another more than 3,000 years ago. This means that the Sami language group is as old as the Germanic language group, which includes German, English, Dutch, Norwegian, Swedish and Danish (The New Encyclopædia Britannica 1993) and twice as old as the Romance language group, which includes Italian, French, Spanish, Portuguese and Romanian (Palmer 1954). The long history of the Sami languages, the fact that they are to a large extent mutually unintelligible, and a range of other considerations, leads many linguists to classify them into several distinct languages rather than different dialects as they are often described (see http://en.wikipedia.org/wiki/Dialect for a general discussion of the dialect versus language controversy).

Although the Sami languages are classified as Finno-Ugric, their vocabularies are heavily influenced by contact with Slavic and Germanic neighbors (Aikio 2006, 2007a, b). In addition, recent research suggests that they also contain remnants of the original Paleolithic languages of Scandinavia (Aikio 2007 a, b). This supports the results of genetic studies suggesting that the origin of the Sami people is not co-extensive with the origin of the Finno-Ugric aspects of the Sami languages (Tambets, et al. 2004).

Linguists currently recognize nine living Sami languages (UNESCO 1993). A rough estimate of the traditional locations and number of speakers of these languages is shown on the map.

The Sami languages are usually discussed as forming two main groups based on geographic, historic and linguistic relatedness. These are Eastern (Inari, Kildin, Skolt, Ter) and Western (Lule, North, Pite, South) (Sammallahti 1998). Note that although the Sea Sami people seem to once have had an independent language that has been argued to belong to either the Eastern Sami or Western Sami group (Ravila 1932; Hansegård 1966; Bergsland 1967), several centuries of social pressure have resulted in the Sea Sami adopting the North Sami, the Lule Sami and/or the Norwegian languages. There are claims, however, that there are still a few old people left speaking Sea Sami in Kvænangen and Varanger in Norway.

In addition to the nine living Sami languages, Akkala Sami (not shown on the map) was once spoken in Russia but died in 2003 when the last speaker died (http://www.galdu.org/govat/doc/nordisk_samekonvensjon.pdf).

Because of its long and independent history, the relatively few numbers of speakers (i.e. less than 30,000 total), and the fact that very few children learn Sami, the Sami language family is arguable the most endangered language family in Europe (UNESCO 1993).

Lule Sami is a member of the Western Sami language group (Sammallahti 1998) and the second largest of the Sami languages (UNESCO 1993). It is spoken by fewer than 1,500 people. As shown on the map, the traditional Lule Sami area runs in an east-west band from Luleå in Sweden to Nordland in Norway.

According to the UNESCO Red Book of Endangered Languages (UNESCO 1993), Lule Sami is listed as seriously endangered. Following UNESCO’s new 9-factor evaluation, we give it a rating of severely endangered.

As with all languages, Lule Sami contains a complex dialect continuum that is the result of geographical, historical and sociological factors. Particularly in those areas where there is significant contact between speakers of Lule Sami and other Sami languages, there is greater similarity among the languages and greater mutual intelligibility (e.g. see Grundström (1946:II) and Collinder (1949:x) for an example of North Sami influence on Lule Sami in Gällivare). This often leads to the impression that Lule Sami and North Sami are mutually intelligable and thus might be considered different dialects of a single language. However, without special training or a history of contact with one another’s languages, it is quite difficult for Lule Sami speakers and North Sami speakers to converse with one another using their respective languages, and they resort to using Norwegian and/or Swedish. One might compare this aspect of the relationship between Lule Sami and North Sami with that between German and Dutch (see http://en.wikipedia.org/wiki/Dialect#Dialect_continuum).