go back to Parallel Annotation of Speech and Text

Foran kortsida av svampen så er det en bøtte med en hank på og halveis fylt med vann.
“In front of the shorter side of the sponge, there's a bucket with a handle, and filled halfway up with water.”

Altså, du har TVen som er nesten helt inntil nederste delen av rektangelet og så har du et område som er like bredt som TVen nedenfor TVen igjen.
“So, there's the TV, which is almost completely up against the lowest part of the rectangle, and then there's an area the is just as wide as the TV below it.”

Og de når cirka opp til hodet på slangen, altså den slange-slangen, ikke vannslangen.
“And they reach just about as high as the snake's head, the snake's, mind you, not the water hose's.”

In this sentence we can look at how toneme 1 and toneme 2 is used in inflection. It is also a good example of how morphological annotation can be incomplete without a more thorough look at the actual pronunciation of words. 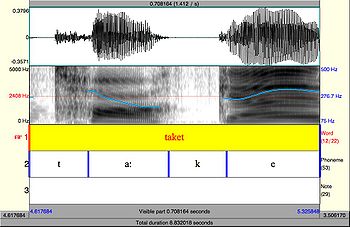 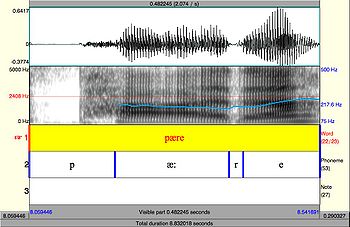 Here we have screenshots of two of the words from the sentence, “taket” and “pære” in orthography, viewed in the Praat application. The latter word is part of a compound word, but for the sake of simplicity we can disregard this. The pitch is shown as a blue curve in the middle. Phonemically these words are transcribed /ta:k+e/ and /pæ:r+e/, where the suffix /e/ in the first word denotes definite singular (“the roof”) and in the second indefinite singular (“bulb”). It would seem we have two different morphemes that are realised by the same morph /e/, however, this is not the case. As we can see, the inflected words have different pitch contours, in /ta:k+e/ there is an HLH contour (the word has toneme 2), while in /pæ:r+e/ there is a LH contour (toneme 1). One way to analyse this is to say that the suffix /e/ in /ta:k+e/ carries an extra tone (or tone bearing unit) with it, while the suffix /e/ in /pæ:r+e/ does not. This means that the two suffixes are not phonologically the same.